Thomas Hill Standpipe Under Construction Circa 1897 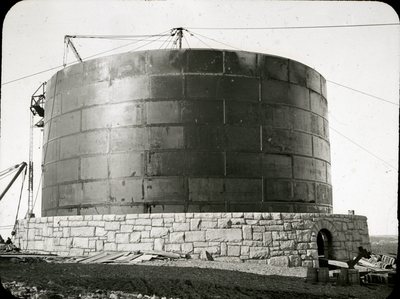 History of the Thomas Hill Standpipe, as compiled by the Reference Department at Bangor Public Library:

"In June 1883 the Water Board recommended to the City Council the purchase of the Samuel R. Prentiss property on Thomas Hill as the site for a reservoir of 10,000,000 gallons capacity, and caused a survey to be made, and an estimate of the cost. This was placed on file and no further action taken for several years.

In 1895 the purchase of the Prentiss lot was made by the City and Mr. A. B. Towner of Holyoke, Massachusetts, was consulted and plans drawn for a standpipe on Thomas Hill. It was commenced in 1897, completed in 1899 and was capable of furnishing an outlet of 3280 gallons a minute for a town of 50,000 inhabitants. Its cost was $43,334.69. The contract was awarded to the New Jersey Steel & Iron Co., and Bearce & Clifford of Lewiston made the foundation. The construction of the wooden building was let by contract to Major James M. Davis.

The tank itself is 50 feet in diameter and has a capacity of 1,500,000 gallons [much less than initially planned -- see above]. Around this tank is a wooden structure which rests on a stone foundation nine feet above the ground, making the total diameter 75 feet. The standpipe is 97 feet high, the first balcony being 67 feet high.

In 1908 a string of lights was placed on the covered walk which runs about just under the roof. There are 24 lights, each of them 32 candle power and they are placed some 20 feet apart. A second crown of lights, between 300 and 400 was placed in 1912 on the very top of the structure.

In 1933 a topographical map of the country, to be seen at eye level range from the tower, was presented by Mr. Phillip T. Coolidge. In 1935 a water level indicator was installed at the standpipe, with a recording instrument located in the superintendent's office and a direct reading instrument in the pump room.

Early in World War II, the Army requested that the lights on the standpipe be shut off, and the structure painted the olive drab of the army. This was to prevent enemy pilots from using the tower as a guidepost to Dow Field, as American aviators had previously done. These lights were turned on again just before V-J Day, 1945, and the structure repainted white in 1949.

For many years the standpipe was open to the public and many hardy souls climbed the 101 steps to the observation floor for the sake of the view. On a clear day one could see for miles around and amply repaid one for the climb. Tourists from every state in the Union have at some time or other visited this place. A fatal accident to a young visitor caused the closing of the building to sightseers.