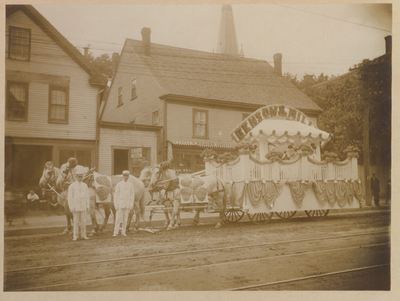 "As general opinion as heard on the street, it was a toss up for favoritism between the float of Freese, with its bevy of butterfly maidens and the float of Benson & Miller, which delightfully set off its white background with yellow flowers and trimmings, while within the square of enclosed 'yard' was a number of beautifully dressed young women of were observed of all observers. Over all was a canopy of white, and an arch with the name of Benson & Miller in yellow chrysanthemums. The four horses wore big shamrocks as decorations of their fly shields."

Location of photograph is 273-275 Main Street, as the businesses of shoemaker Daniel C. Devoux and Samuel Schiro, a fruit and confectionary store, are visible in the background. Source: 1912 Bangor city directory.