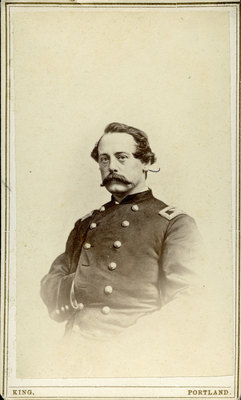 Jameson, Charles D., brigadier-general, was born in Gorham, Me., Feb. 24, 1827. He was educated in the public schools, became a prosperous lumberman, and in 1860 was a delegate to the Democratic national convention in Charleston, S. C. He was a member of the state militia and in May, 1861, was placed in command of the 2nd Maine regiment, the first that left that state for the seat of war. He led his regiment at Bull Run, and for protecting the Federal retreat to Centerville he was commissioned brigadier-general of volunteers, Sept. 3, 1861. He was an unsuccessful Democratic candidate for governor of Maine in 1861 and again in 1862. Gen. Jameson participated in the Seven Days' battles about Richmond, commanding the 1st brigade of Kearny's 3rd division, Heintzelman's 3rd army corps, and after the battle of Fair Oaks was stricken with camp fever and forced to return to Maine. He died in Oldtown, Me., Nov. 6, 1862.