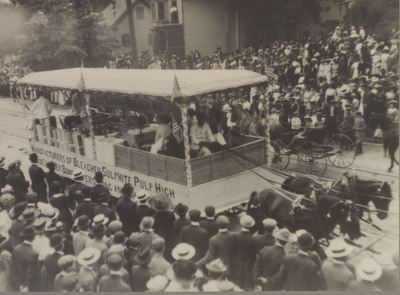 "Other floats which were noted as the procession wound its way down Main Street across the bridges and through Exchange ... were ... the Eastern Manufacturing Co., whose big float bore a reduced paper plant, where the men made paper and the girls prepared it for shipment."

Eastern Manufacturing Co. were manufacturers, according to the 1912 Bangor city directory page 132, "of lumber, sulphite fibre, ground wood pulp and paper." Page 2 has an ad reading "manufacturers of bond, linen, ledger, white, writing, envelope and railroad writing papers, also dimension spruce lumber and boards." The office for the company was at 92 Exchange Street in Bangor, while mills were in South Brewer. Fred W. Ayer served as company president.