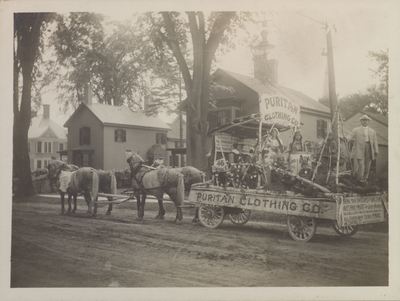 From the Bangor Daily News, June 20, 1912: "One of the very attractive floats was that of the Puritan Clothing Co., D.P. Mulvey, manager. It gave a very fitting representation of the Puritan days in 1650. Within a cabin, crude, but typical of the days of the early settlers sat Priscilla, spinning on an old spinning wheel over 100 years old. Beside her sat John Alden ... The costumes worn were brought from New York, and were also typical of Puritan days. Real Indians made the setting more attractive and four from the Ranco family of the Old Town tribe offered their services, and sat in Indian fashion about a moss covered tripod."

The Puritan Clothing Co. operated at 46 Central Street. D.P. Mulvey served as manager. The 1912 Bangor city directory does not specify what D.P. stood for.

The sign on the back of the float reads, "Bring your envelopes to our store / Get free prizes for lucky numbers / Baseballs bats waists trousers games / All given away to-day free! / 46 Centra St. near Kenduskeag Stream"