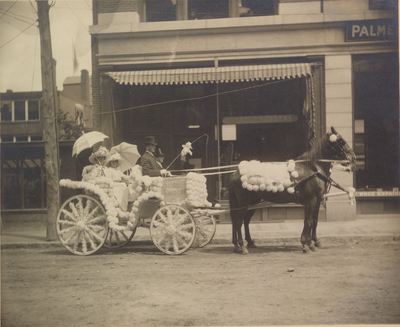 "Another attractive turnout was the two horse hitch of the Siegel-Sanders Co. which was drawn by a spanking pair of chestnuts, beautifully matched. The entire body and wheels of the trap which they drew was covered with pink, while the wheels and all exposed parts not in pink were encased in lavendar, in full livery, while the ladies who occupied the rear seat wore pink and lavendar gowns to correspond with the general effect. It was one of the smartest carriage exhibits to enter the parade."