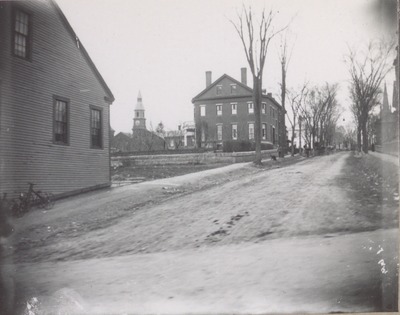 Photo is not dated. Estimate based on the presence of the church steeple on Unitarian Universalist Society Church at 120 Park Street, which was destroyed in the April 1911 fire.

Back of photo does indicate Sawyer House. Andrew C. Sawyer, president of Sawyer Book & Shoe Company, is listed the resident of 180 French in the 1901 Bangor city directory.

The 1903 and 1905 city directories indicate the resident was Reverend John S. Penman, pastor of the Central Congregational Church.

The 1907 city directory states Henry M. Chapman, a physician, resides and has his office at 180 French. The 1912 directory indicates Chapman's residence as the Bangor House, his office at 22 State Street. It is likely this home was a victim of the April 1911 fire in Bangor.

The photograph states Dr. Henry M. Chapman on the back. It is possible, then, that the closer estimate for this photograph would be 1907-1911.