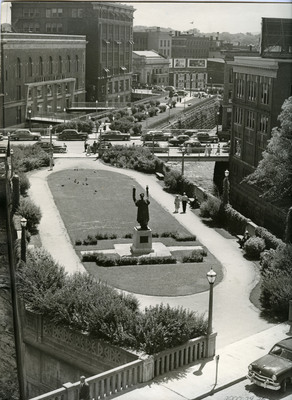 A view of Norembega Parkway (Mall) looking from Franklin Street toward Central Street and on to State Street with the Kenduskeag Stream running through downtown. Visible in the park are the two statues by Charles E. Tefft, Victory and Hannibal Hamlin. Sears Roebuck and Company is in the Harlow and Kenduskeag Mall warehouse on the left. The Bangor Savings Bank building on State Street is visible as is the W. S. Emerson Company Inc. building beyond.